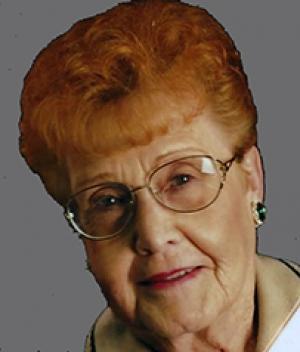 Helen spent her early years in Colorado until moving with her family to Pleasanton, Kan., where she graduated from Pleasanton High School in the Class of 1948. She married Perry Johnson on Oct. 24, 1948, in Pleasanton, Kan. The two resided in the Green Valley area of Linn County where their children were born.

She worked for a time at Braemoor’s Sewing Factory, was a member of the Pleasanton First Christian Church and the ILGWU. Her family and church continued to give her joy and strength through the years.

She was preceded in death by her parents; her husband, Perry; a brother Thomas Kramer; a sister Dorothy Kramer Williamson Gurney; and a son-in-law Bill Morrisey.

Funeral service was held Monday, Aug. 8, 2106, at the Pleasanton First Christian Church. Burial in the Pleasanton Cemetery. Visitation was held before service time at the church. Contributions are suggested to The Residencies, Christian Church or Crossroads Hospice. Online condolences may be left at www.schneiderfunerals.com. Arrangements: Schneider Funeral Home and Crematory, Pleasanton, Kan.