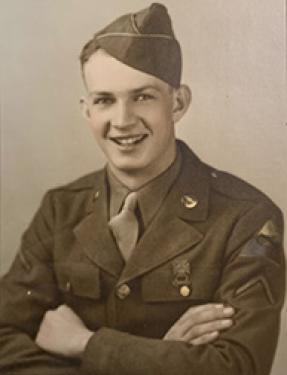 Shortly after graduating, he enlisted in the U.S. Army and served in the 11th Armored Division, 42nd Tank Battalion.  During the war, he served in combat overseas in England, France, Belgium, Germany and Austria, serving first in action in the Battle of the Bulge. He was honorably discharged in March 1946. He returned to Kansas City and married his wife, Betty Golding, in June 1946, where they made their home with their son and daughter. He worked for TWA for five years prior to working for The Ruf Realty Company. They moved to their farm in La Cygne in November 1985, where he was active in farming and served on the boards of the Linn County Cooperative, United Cooperative, Rural Water District 3 and the Linn County Airport Board. He was a member of the Calvary Baptist Church in La Cygne, Kan.