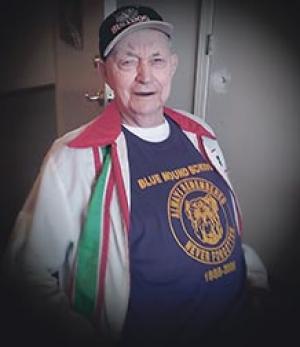 Jack Harvey Ferguson, age 93, Pleasanton, Kan., passed away on Monday, Aug. 23, 2021. He was born in Centerville, Kan., the son of Charlie Harvey and Ruth Arlene Scott Ferguson. He graduated from Blue Mound High School. Jack was a good athlete in high school and played town team baseball for Farlinville after high school. He was united in marriage to Reba Lavonne Bartlett on Oct. 29, 1950. She preceded him in death on Feb. 11, 2008. He worked as a farmer and as a dock hand for Consolidated Freightways. He enjoyed coon hunting, fishing, watching baseball, and college basketball, especially March Madness. He was also preceded in death by a sister, Elaine Schasteen. Jack is survived by two daughters, Laurie Mauro (Michael), and Tracie Sutcliffe (Harry); and three grandchildren, Hannah Mauro, Caden Pruitt, and Evan Ferguson Pruitt.

Due to the pandemic, no service is scheduled at this time. A service will be announced at a later date to honor the life of Jack Ferguson. Contributions are suggested to the Kansas City Hospice House, c/o Schneider Funeral Home, P.O. Box 525, Pleasanton, Kan. 66075. Online condolences can be left at www.schneiderfunerals.com.