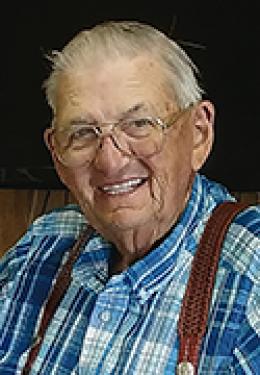 Jim was born Dec. 30, 1936, at Centerville, Kan. He was the oldest of four children born to William Fredrick and Olan F. (Baker) Finfrock. He grew up in Centerville.

He was married to Faye Stites on Oct. 17, 1954, at rural Parker, Kan. They made their home in Centerville and became the parents of two children. They moved to LaCygne and lived there several years. Faye preceded Jim in death on June 26, 1982.

Jim owned and operated a filling station in Parker, Kan., when they lived there. He later worked for Union Gas Company in Bonner Springs, Fort Scott, and LaCygne then went to work as a truck driver. His truck driving career began with LaCygne Truckline which Jim later bought. He also worked for Joe Donohue and then the Walmart Ottawa Distribution Center as a truck driver.

Jim loved camping and fishing at Melvern Lake. He enjoyed running trotlines with his son at Sugar Creek. He also enjoyed deer hunting. He had many canine companions throughout his lifetime including Jake, Jadie, and Butch.

He was preceded in death by his parents; his first wife; his brother, Paul; and one great-grandchild Gracein Lickteig.

A Celebration of Life will be held at a later date. Memorials are to the Foundation for Peripheral Neuropathy and can be sent c/o Dengel and Son Mortuary-Crematory, 305 N. Pearl St., Paola, Kan. 66071.