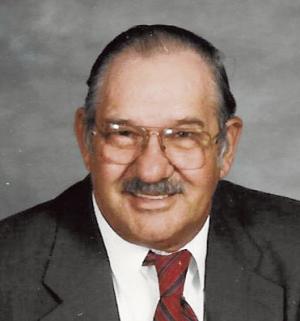 James Kenneth “Kenny” McClanahan, 83, La Cygne, Kan., passed away on Thursday, June 8, 2017. He was born on March 1, 1934, in La Cygne, the second of eight children born to Elmer and Fern Edwards McClanahan.
Kenny graduated from La Cygne High School in the Class of 1954.
He united in marriage with Arlene Culter on Aug. 29, 1954. Kenny and Arlene made their home in La Cygne. They were together for 62 years and raised five children.
He worked and retired from Farmland Industries.
Kenny was very active in the community, serving on the Park Board, La Cygne City Council, Historical Society and Planning Commission. The community appreciated and recognized his service by making him the 2006 Grand Marshal of the La Cygne Fiesta.
Aside from all his service to the city, what he loved the most was softball. He started coaching his children’s teams in the 1970s. After his children were grown, Kenny continued to coach the daughters of the community for several years, winning many tournaments including the state in 1986. While coaching and umpiring, he became the Kansas Amateur Softball Association Deputy District Commissioner for several years. During his retirement, he was instrumental in getting the Prairie View High School softball program approved and started.
Kenny also enjoyed fishing, frogging, boating and camping. He was a quiet man but love d to tell a good story. Many times he would start laughing so hard he would cry before he finished telling it.
He was a longtime member of the B.P.O.E. 921, Osawatomie and the Calvary Baptist Church, La Cygne.
Kenny was preceded in death by his parents; two brothers, Jess and Carl; and two sisters, Cleda Fern and Vickie.
He is survived by his wife and best friend Arlene; three sons and their wives, Kenny and Joyce, Mike and Jody, and Randy and Renee; two daughters, Cheryl and Gary Weis and Tracy and Todd Williams; three sisters, Carol and Joyce Brewer and Linda Dodge;  14 grandchildren; 14 great-grandchildren; and one great-great-grandson.
Graveside service was held Tuesday, June 13, 2017, at the Oak Lawn Cemetery.
The family suggests contributions to the Prairie View Softball Program or Calvary Baptist Church. Online condolences for the family can be left at www.schneiderfunerals.com.