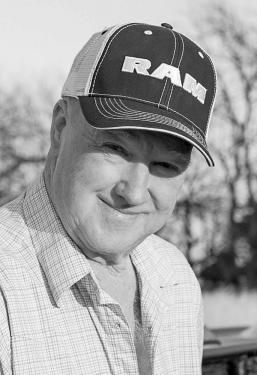 James Walter Meech, age 62, passed away Monday, Sept. 2, 2019, with his wife, kids and close friends near, on his farm home near Fort Scott, Kan., after a battle with Gliosarcoma brain cancer. Jim was born April 18, 1957, in Fort Scott, the son of Dennis Walter and Estella E. (Gier) Meech.

He married Marita Miller on Sept. 8, 1984, in Fort Scott. They have two children, which he was extremely proud of, Elizabeth Marie Meech and John W. (JW) Meech.

As a young adult, Jim worked in the mechanic shop at Midwestern Distribution and Charlie Griffiths Cattle and also hauled cattle for Bob Walrod at Fort Scott Livestock on weekends.

Over the years, he enjoyed pulling his International 1066 farm tractor at local tractor pulls and was proud of his kids competing in pedal tractor pulls when they were young at the local, state, national and international levels. Jim beamed with pride when he talked about his kids’ horse and rodeo accomplishments.

Farming was deep in Jim’s blood. He was a very successful farmer, as he spent his entire life farming and ranching in Bourbon and Linn counties. Beginning after his graduation in 1975 from Fort Scott High School, Jim worked with his family on Triple M Farms, until his dad’s passing in 1992. From 1992-2012, Jim was a partner in Meech Brothers Farms. Since 2013, Jim worked/operated Jim Meech Farms with his wife, Marita.

The family suggests contributions to the Jim Meech Farmers/Ranchers in Health Crisis Fund. Online condolences for the family can be left at www.schneiderfunerals.com . Arrangements: Schneider Funerals, Pleasanton.