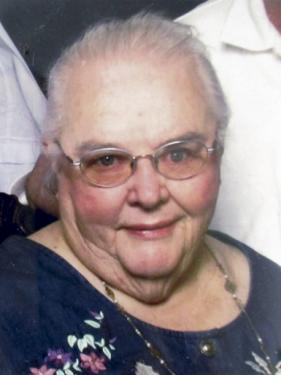 Jimmie was born Oct. 1, 1934, in Van Zandt County, Texas. She was the eldest of two born to James Berriman and Claudia Berl (Flowers) Downing. She grew up in Texas. They moved to Lubbock, Texas, when she was 10.

At the age of 18, Jimmie and Hanford Autrey Workman eloped on April 22, 1952, in Clovis, N.M. After marriage, the couple moved to Arizona. They soon moved back to Lubbock where Jimmie worked for the telephone company. While in Lubbock, Jimmie gave birth to her only child, William Richard, on July 23, 1955. In 1965, the Workman family moved to Kansas City, Kan. When they moved to Kansas, Jimmie went to beauty school and became a cosmetologist. She had her own shop in Kansas City.

In 1970 the family settled in Parker on a farm where they raised pigs. Jimmie went to work for Mi’Lady’s Hair Salon in Osawatomie until 1978 when she retired and became a full-time farm hand. Jimmie was a hard-working woman. She worked on the farm countless hours and tended to thousands of pigs over her lifetime on the farm.

Jimmie taught her nieces to knit and helped them sew. In the summer they would plant a garden and then can the vegetables for the winters.

She is preceded in death by her husband of 60 years, Hanford, and her parents.

Visitation is 6-8 p.m. Wednesday, Nov. 9, 2016, at the Eddy-Birchard Funeral Home. Service is 2 p.m., Thursday, Nov. 10, at First Baptist Church in Parker. Burial will be at Highland Cemetery, Parker.

Memorials are to the Jimmie Workman Memorial Fund and may be sent in c/o the Eddy-Birchard Funeral Home, P.O. Box 430, Osawatomie, KS 66064.