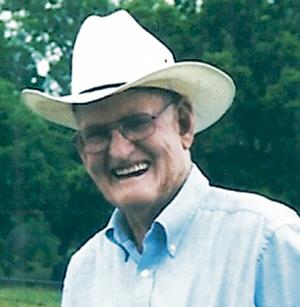 Joe Fred Clearwater, age 93, La Cygne, Kan., passed away on Thursday, Dec. 15, 2016, at Prescott Country View. He was born on Sept. 14, 1923, at Boicourt, Kan., the son of Frank and Nellie Johnson Clearwater.
Fred served his country in the United States Navy during World War II. He married Dorothy Johnston. She preceded him in death on Jan. 22, 1983.
Fred attended the La Cygne United Methodist Church and was a member of the V.F.W. and the American Beefmaster Association.
He was preceded in death by a brother, Glen Clearwater; and three sisters, Edna Ross, Mary Hughes and Thelma Sherman.
Fred is survived by two sons, Larry Clearwater and wife Dalena, and Gary Clearwater and wife Susie; two daughters, Kathy White and husband Donnie, and Karen Matula and husband Dan; a sister, Dorothy Coffeen; and 11 grandchildren and 19 great-grandchildren.
Funeral service was held Monday, Dec. 19, 2016, at the Schneider Funeral Home and Crematory, Pleasanton Chapel. Burial was in the Woodland Cemetery.
The family suggests contributions to La Cygne United Methodist Church, Mercy Hospice or Prescott Country View. Online condolences can be left at www.schneiderfunerals.com. Arrangements: Schneider Funeral Home and Crematory, Pleasanton Chapel.