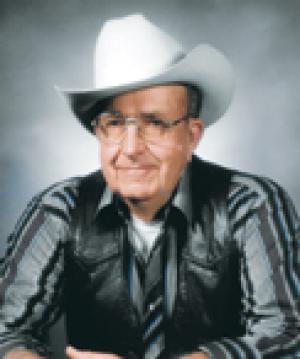 John Carl Johnson, 90, Mound City, Kan., passed away Friday, May 15, 2015, at Prescott Country View. He was born at Linnville, Kan., Oct. 29, 1924, the son of Harley Otis and Pearl May Shaffer Johnson.
He attended school at Linnville and Mound City. He was a Navy Veteran of World War II.
John married Joanna Schmitz Oct. 9, 1948. She preceded him in death May 16, 1989. He later married Sharon Purdy, who also preceded him.
He worked as a farmer and a stockman. He was a member of Sacred Heart Catholic Church, American Legion Hewitt New Post #249 and the V.F.W.
He was also preceded in death by his parents; two brothers, Otis and Perry; two grandsons, Morgan and Matt Johnson; and a great-granddaughter, Natalie Grace Johnson.
John is survived by four sons, Mike Johnson and wife Mary, Steve Johnson and wife Penny, Jim Johnson and wife Pam, and Tim Johnson; two daughters, Johnna Cansler and husband Gary, and Patty Love and husband Bob; sisters, Isabel Read and Viola Campbell; 21 grandchildren and 16 great-grandchildren.
Mass of Christian burial will be held 11 a.m. Wednesday, May 20, 2015, at the Sacred Heart Catholic Church. Burial will be in Sacred Heart Cemetery. Rosary was prayed Tuesday at the Schneider Funeral Home and Crematory, Mound City Chapel. The family suggests contributions to St. Jude Children’s Hospital or the American Diabetes Association. Online condolences for the family may be left at www.schneiderfunerals.com. Arrangements: Schneider Funeral Home and Crematory, Mound City Chapel.