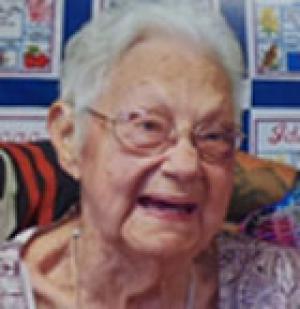 Juanita was born Sept. 9, 1929, in Emporia, Kan. She was born to Jesse Clifford and Viola Beatrice (Hammond) Shaver. Juanita grew up in Emporia where she attended school, graduating with the Emporia High School Class of 1948.

During and after high school, Juanita worked for the local Woolworth store. Then in 1948, Juanita and Lewis Dean Parker Sr. were married in Emporia, Kan. Together they had two children , Rita and Lewis Dean, Jr.

After Dean got out of the military, the family moved to Wichita, Kan.,for a short time. They then moved back to Emporia where Juanita went back to work at the Woolworth. She also helped Dean at a gas station.

In 1974, Dean and Juanita moved to Reading, Kan. Juanita was still working at the Woolworth until a tornado caused it to close. She and Dean then purchased a grocery store/restaurant in Reading where she also had her ceramic shop, DJ’s Cottage Crafts. They owned and operated the store until 1989. Dean passed away in 1990.

In 1998, Juanita married Morgan Fann in Reading, Kan.  They made their home in Reading until 2003 when they moved to Parker, Kan. Juanita continued her ceramics business, DJ’s Cottage Crafts, out of her home. Morgan passed in 2008.

Juanita was always busy. Over the years she taught many 4-H kids ceramics. People would bring their kids to her home to do ceramics. If she wasn’t busy with her ceramics, Juanita was quilting and baking. She was known for her homemade bread and cinnamon rolls. Juanita was an active member of the Reading and Parker United Methodist Church. She loved working at the food pantry at Parker UMC. Juanita was a Girl Scout Leader for years. She was a member of the Beta Sigma Phi Iota Iota chapter and the Loyal Workers club. Most importantly, Juanita loved her children, grandchildren and great grandchildren.

She was preceded in death by her first husband Dean Parker and her second husband Morgan Fann, her parents, her brother Clifford Jessie Shaver II, her sister Helen Louise Shaver and her half-sister Patricia Shaver and three long haired dachshunds all named Collette.