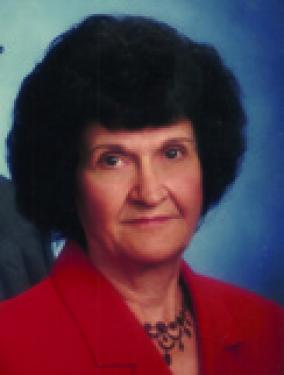 After graduating from Prescott High School at the age of 17, she passed the county teacher examination. That fall, her first teaching job was at a one-room school three miles east of Prescott called Indian Creek School. June went on to teach at Prescott, Mapleton and finally at Mound City where she retired from in 1979 after teaching 45 years. During this time, she received her master’s degree from Pittsburg State Teacher’s College. Literally hundreds of children have benefited from her dedication to teaching.

June and her husband, Leighton, were avid antique collectors. They both enjoyed traveling and going to antique shows and auctions all over the United States searching for rare and unique antiques.

Music was very prominent in June’s life. She started playing the piano at age eight and was still playing last week. Three things were top on her list of importance: family, friends, and education. Not having children herself, her nieces and nephews (for several generations) became her kids.

As for friends, she had many. Not just her neighbors but her church family and in several organizations that she belonged to as well.

She was preceded in death by her beloved husband Leighton Fossey in March of 2003, her parents, and two brothers, Anton (Bub) Smith, Jr. and Clayton Smith.

Her generosity and love will be missed by many, many people.

Thank you, Lord, for letting us enjoy June for as long as you did.

June will be laid to rest in Prescott, Kan. where she grew up.

Funeral service was held Monday at the Mound City Christian Church. Burial was in the Prescott Cemetery. The family suggests contributions to the church. Online condolences for the family may be left at www.schneiderfunerals.com. Arrangements: Schneider Funeral Home and Crematory, Mound City Chapel.