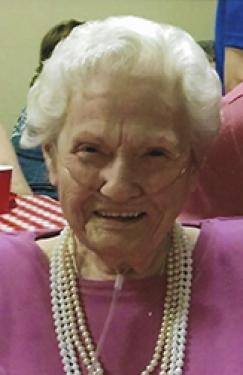 Katherine Leslie Shaughnessy, age 95, Louisburg, Kan. went to be with the Lord and beloved husband Bryan on Sunday, Sept. 13, 2020. She was born on May 24, 1925, in Kansas City, Kan., the daughter of John H. and Catherine Elizabeth "Betty" Lightner McCarty. She graduated from East High School in Kansas City, Mo. Leslie married Harry "Gene" Bedgood. He preceded her in death. She later married Bryan Daniel Shaughnessy, who also preceded her in death. Among numerous jobs, she was most proud of being the editor at the Basehor Sentinel. She also worked for the Montgomery County News and the Arkansas Democrat. Leslie was a talented story writer and poet. She finished her working career as a receptionist in an optometry office. She was also preceded in death by three sons, Jerry Bedgood, John Bedgood, and Harry E. "Skip" Shaughnessy; two grandsons; one great-granddaughter and two great-grandsons.