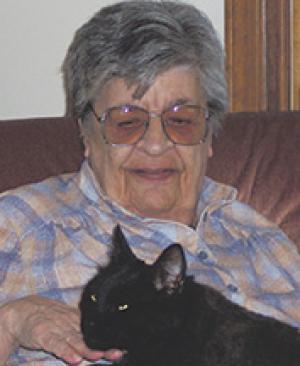 Kathryn N. Kite McGee, age 92, Centerville, Kan., passed away, Jan. 18, 2022, at the Residential Living Center in Garnett, Kan. Kathryn was born, June 7, 1928, the daughter of Chester and Velma (Lee) Kite, at Garnett, Kan. She married the love of her life, Kenneth McGee in 1954 and to this union three daughters were born. She was a lifelong member of the Methodist Church in Garnett and Centerville. Kathryn was a senior lifeguard and professional swimmer. She swam the length of the North Lake in Garnett which is approximately two miles and has taught babies from two months up to 102 years old to swim. Among some of Kathryn’s other interests were playing piano, art, sewing, hooking rugs, jigsaw puzzles, listening to music, watching television with someone all while holding her cat Blackie. Kathryn was a patient, loving and caring person, who would do anything to help her family and friends.  She was preceded in death by her parents; a brother, Bob Kite, of Garnett; and a grandson, David Reiter. Kathryn is survived by her husband of 67 years, Kenneth; four daughters, Connie (McGee) and Howard Reiter (Kincaid), Karen Kay (McGee) and Bob Clayton (Olathe), Patricia(McGee) and Randy Latta (Iola), Lillian Kite (Centerville); seven grandchildren, Gary Reiter, Angela Reiter, Dean Friend, James Lloyd, Ryan Latta, Jarred Latta, and Trent Latta; and four great-grandchildren.

Contributions are suggested to the Anderson County Hospital, Residential Living Center Activity Department and may be sent in care of Schneider Funeral Home  P.O. Box J Mound City, Kan.  Online condolences may be left at www.schneiderfunerals.com.