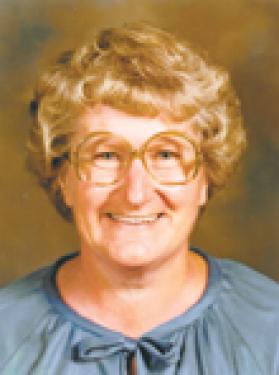 She graduated from La Cygne High School. She then attended Pittsburg State Teachers College, receiving a bachelor’s in elementary educations. She then taught at Elsmore, Kan., for one year.

Kathyrn married Melvin Smith on May 25, 1956, at Jingo, Kan. She became a homemaker and farm wife until returning to teaching in Pleasanton, Kan., for 17 years, retiring in 1994.

She was a member of the Blue Mound Federated Church, Lady Lions, Lend a Hand Club, charter member of the Busy Workers 4H Club, Lucky Ridgers 4H leader, and was the first Linn County Fair Queen.

She was preceded in death by her parents, husband Melvin, and sister Rozella Lewis.

Funeral service will be held at 11 a.m. Friday, Dec. 30, 2016, at the Blue Mound Federated Church. Burial will be in the Sunny Slope Cemetery. Visitation will be held from 6-8 p.m. Thursday at the Schneider Funeral Home and Crematory Mound City Chapel.

Contributions are suggested to the Blue Mound Federated Church. Online condolences for the family may be left at www.schneiderfunerals.com. Arrangements: Schneider Funeral Home and Crematory, Mound City Chapel.

Linn County News Published April 21, 2021   Floyd Arthur Holmes (or Arthur Floyd Holmes, it was never clear which) passed away peacefully at his residence at Grandwood Assisted Living in Grove, Okla., on Feb. 13, 2021, exactly one month after celebrating... [More]

REVISED 4/22/2021 - The story of the murder of a Mound City woman, Dawn Rosso, began prior to her throat being cut on Saturday, June 20, 2020 – it actually began when her alleged murderer Dylan Parks-Maki broke her wrist and ribs; To see the full article, check out this... [More]

Following a 10-minute executive session for land acquisition on Monday, Pleasanton City Councilman Jake Mattingley said a representative of Family Dollar/Dollar Tree “chose us because of our location” to build a store. Mattingley said the corporation usually targets... [More]

Pleasanton City Administrator Teresa Whitaker introduced BG Consultants engineer Jason Hoskinson to the City Council Monday night, stating his job would be to “help the city out with the potential development project” and figure out where the engineering firm can... [More]

The Jayhawk-Linn track teams traveled to Pleasanton on April 13 to compete in the Pleasanton Invitational.  Both the boys’ and girls’ teams did well as the boys won the meet with 124 points. The girls placed second with 96 points. Uniontown won the meet for... [More]