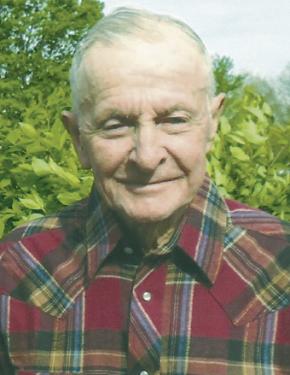 Kay Lloyd Black, age 93, Prescott, Kan., passed away on Sunday, Jan. 22, 2017. He was born on Dec. 17, 1923, in rural Pleasanton, Kan., the son of Clovie Lloyd and Edith Holmes Black.
He attended grade school at Fairfield and graduated from Prescott High School in the Class of 1942. Kay served his country in the United States Army during World War II.
He married Carmita May Odell on May 15, 1946, at Fort Scott, Kan. Together they lived on the farm south of Prescott until 1999 when they moved into town. While on the farm they had a dairy herd for 40 years. They sold the dairy cows and started a beef cow-calf operation. He had a kind heart for animals. There were always dogs and horses, including a team of draft mares, Babe and Bird, on the Black farm. He pulled the Linn County Bandwagon in the high wheel parade at Lawrence, Kan. The family attended many shodeos. Kay enjoyed hunting coyotes with his sight hounds. He had a fondness for his animals, but his real love was for his family.
He was preceded in death by his parents and a son-in-law, Darrel Beth.
Kay is survived by a son, Ken Lee Black and wife Robin; a daughter, Sandra Beth; and a brother, Carl Black. He is also survived by grand and great-grand children, who he was known to as “Poppy Kay.” The four grandchildren include Kevin Black and Sara, Shana Emerson and Mike, Clifton Beth and Whitney and Kayla Wilkinson and Adam; with eight great-grandchildren, Nathan, Isaiah and Rebecca Black, Cali, Nick and Austin Emerson, and Ella and Carter Beth; and one great-grandchild on the way.
Funeral service will be held 2 p.m. Thursday, Jan. 26, 2017, at the Schneider Funeral Home and Crematory, Pleasanton Chapel. Burial will be in the Prescott Cemetery. Visitation will be held from 5-6:30 p.m. Wednesday at the Schneider Funeral Home, Pleasanton Chapel.
The family suggest contributions to the Prescott Cemetery, c/o Schneider Funeral Home, P.O. Box 525, Pleasanton, KS 66075. Online condolences for the family may be left at www.schneiderfunerals.com. Arrangements: Schneider Funeral Home and Crematory, Pleasanton Chapel.