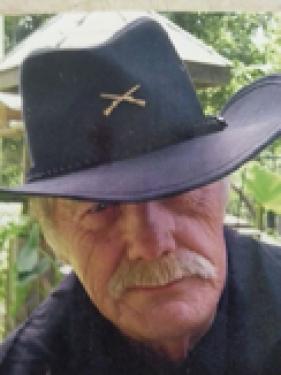 Kurt Eugene Kluge, of Mound City, Kan., went to the Lord on Saturday, May 16, 2015 – he was 73. He was born in Kansas City, Kan., on March 3, 1942.
Kurt served our country in the U.S. Air Force and was a veteran of the Cold War, serving at Bunker Hill AFB and overseas on the island of Guam. He was a man who loved to hunt and fish. He also enjoyed planting and maintaining his flowers and vegetable garden. He stayed busy; even in his downtime he kept the hummingbird feeders full. But above all else, he loved his family. If Kurt called you friend, you were part of that family. After his military service, Kurt worked at Cortland Container Corp in Fairfax as a welder for 19 years and later at Hobart and PMI.
He was preceded in death by his parents, George Sr. and Heloise; his brother, George Jr.; and his beautiful wife and companion of more than 40 years, Gleness Marie.
He is survived by his six sons, Kurt Kluge II, Allen Sneed, Kevin Sneed, Joey Sneed, Scott Sneed and Andrew Culbertson; three daughters, Trena Guckiean, Tina Spillman and Catherine Day; two very special nieces he regarded as daughters, Kim Thurman and Tammy Judy; two sisters, April Kluge and Regina Oharo; and many grand and great grandchildren.
Graveside services will be held at 1 p.m. Thursday, May 21, at Chapel Hill Memorial Gardens in Kansas City, Kan. Visitation will be held from 6-8:30 p.m. at the Porter Funeral Home & Crematory, Lenexa Chapel, 8535 Monrovia, Lenexa, Kan. The family suggests contributions be made in memory of Kurt Kluge to Olathe Hospice House in c/o Schneider Funeral Home and Crematory, P.O. Box 525, Pleasanton, KS 66075. Online condolences may be left at www.schneiderfunerals.com. Arrangements: Schneider Funeral Home and Crematory, Mound City.