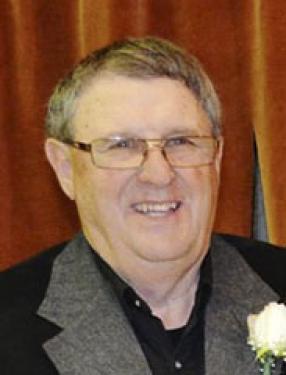 Larry Gene Bogan, age 75, Prescott, Kan., passed away on Monday, March 9, 2020, at his home. He was born on June 11, 1944 in Metz, Mo., the son of Carl and Novella Boston Bogan. He graduated from Hume High School in the Class of 1962. He married his high school sweetheart Harriet Horton on April 11, 1964. He worked at the Leeds General Motors Plant in Kansas City before he and Harriet bought the family farm in 1970. The farm stretches from Missouri to western Kansas, where Larry used to make his rounds every day or two with either Loren Bogan (son) or Chad Gorman (family/friend) just to check his ground.

Larry was a man who had a tremendous work ethic, can-do attitude, and wouldn’t let anybody tell him otherwise. He enjoyed many things from hunting, fishing, slow pitch softball, Western books and movies, going to the “boats” with Harriet, and playing/watching basketball. Basketball was a tradition started with his mother that has been passed down through four generations.

Funeral service will be held 10 a.m. on Thursday, March 12, 2020, at the Hume Christian Church. Burial will be in the Hume Cemetery. Visitation will be held from 5 to 7 p.m. on Wednesday, March 11, 2020, at the Schneider Funeral Home and Crematory, Pleasanton Chapel. Contributions are suggested to Hume Cemetery or Hume School. Online condolences can be left at www.schneiderfunerals.com.