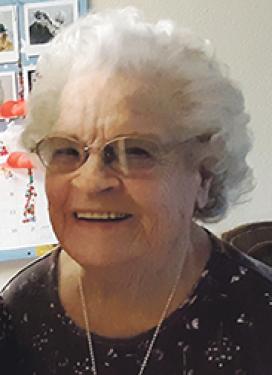 LaVerne Frances McGee, age 92, Mound City, Kan., formerly of Centerville, Kan., passed away Saturday, Aug. 21, 2021. She was born on Feb. 14, 1929, in Coyle, Okla., the daughter of Arthur and Vonnie Morgan Lamb. She spent her younger years in Oklahoma and moved to the Wall Street area in her teens. She graduated from Mound City High School. She was united in marriage to Earnest McGee on June 27, 1948, in the Wall Street Christian Church. He preceded her in death on Dec. 29, 2007.

LaVerne worked at different occupations. These included school teacher and insurance agent at Town and Country and working beside Earnest as they owned Centerville Feed and Supply. She was a longtime active member in the Wall Street Christian Church. Laverne loved to garden and can vegetables, and had an orchard that her husband Earnest put in for her on their farm. She was known for her baking skills and made a grand champion angel food cake that was a family favorite at events and special occasions.

LaVerne valued her family. She enjoyed getting together every year for the Lamb August Birthday Dinner and at Christmas with her very large extended family on both the Lamb and McGee sides of the family. She loved her children and grandchildren devotedly, and she and Earnest set an example that will be carried down to generations of their family in the future.

LaVerne loved the Lord. She taught Sunday school for many years at Wall Street Christian Church where she attended since she moved to Linn County as a teenager.

Funeral service will be at 10 a.m. Wednesday, Sept. 1, 2021, at the Wall Street Christian Church. Burial will follow in the Sunny Slope Cemetery. Visitation will be held from 6 to 8 p.m. Tuesday, Aug. 31, 2021, at the church. Memorial contributions are suggested to the Wall Street Christian Church or the American Heart Association c/o Schneider Funeral Home, P.O. Box J, Mound City, Kan. 66056. Online condolences can be left at www.schneiderfunerals.com.