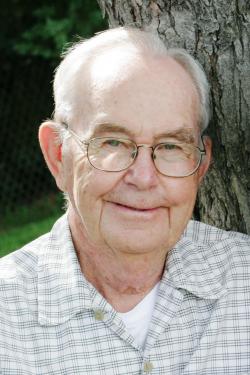 In the weeks following Pearl Harbor, as the U.S. prepared to go to war, Lee Fisher enlisted in the U.S. Navy and was hustled through their officer training course –  a “90-day wonder,” as they called it. When he passed away this week at age 101, peacefully, in his sleep, he was a wonder of a different sort.

Asked on his 100th birthday how he managed to live to such a remarkable age, Lee replied, “Moderation. In all things.”

Lee was born May 2, 1918, in Pleasanton, Kan., the only son of Ruth and William Fisher. He graduated from Mound City Rural High School in Mound City, Kan., in 1935 as class salutatorian. There is a good chance that he said more in his speech than most of his classmates had heard him say all term long. He was a sweet, thoughtful man who listened more than he spoke – yet, the words he chose to share with the world were always worth hearing.

Lee moved to Colorado in 1937, attending DU and graduating with a B.A. in business administration. He was studying engineering at the Colorado School of Mines when the war broke out. Engineers of Lee’s evident skills were prized by the U.S. Navy, and following his officer’s training at the Naval Academy in Annapolis, Md., they wasted no time sending Ensign Fisher to GM University in Illinois to learn large-scale landing craft engines (they’d eventually play a part in the Normandy Invasion). He was quickly promoted to lieutenant and posted to Pacific Fleet headquarters, Coronado, Calif.

Among his duties were maintenance and logistics, which often took him across the bay to the navy offices in San Diego. It was there he met the love of his life.

Jean Stalnaker was in the secretarial pool; she’d see Lee when he came to meet with one of her bosses.

“She made it so that I’d get her phone number,” said Lee.

She wrote it on a piece of paper, and had one of the guys give it to him. He called her, and they hit it off.

Jean lived in San Diego, in a house overlooking the bay. As Lee told it, “In those days, you took a ferry to get back and forth from Coronado. Either that, or you drove 25 miles down the coast to Imperial Beach and back up the Coronado peninsula to get to the base.” Lee would laugh to think of the times he stayed a bit too long pitching woo on Jean’s front porch, only to find himself making that long drive back to his quarters.

He may have occasionally missed the ferry, but he surely didn’t miss the boat. In September 1944 he saved up his gas rations, and he and Jean headed for Las Vegas. There, in the Little White Wedding Chapel, they were married. They remained so for 66 happy years, until Jean passed in 2010.

Lee’s first job post-war was for Sears, in Santa Monica. His boss left a lot to be desired. “Everything that went wrong was my fault, including things he did wrong.” His mom’s cousin put him in touch with a gasoline distributor in Oceanside, and he and Jean moved south. That was more to his liking, and he began learning the trade. When he was given the opportunity to take over the Ace Hi Service Station in Wheat Ridge, Colo., he jumped at it. He survived early gas wars – the prices dropped to pennies per gallon! – and countless giveaway promotions of steak knives, matching tumblers and kiddie toys. He built a reputation for honesty and mechanical skill, earning a loyal clientele that served him well, until his retirement in 1973.

Lee and Jean kept a cabin in Evergreen, Colo., roaming through the woods with one of a series of beloved bulldogs. He honed his talents as a woodworker, making furniture and toys for his nephews’ children and his godsons. His favorite hobby was restoring classic Thunderbirds; he had three over the years, which made those grown-up nephews and godsons incredibly jealous.

Lee was a remarkable man. He radiated sweetness, warmth and good humor. His words were few. His impact on those lucky enough to know him, immeasurable. He will be deeply mourned and greatly missed.