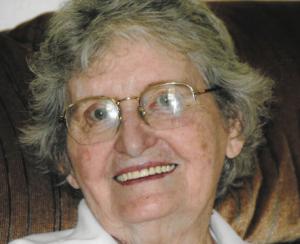 Leota Maxine Hoover, age 95, Mound City, Kan., passed away on Saturday, Sept. 16, 2017, at her home. She was born at Pleasanton, Kan., on Dec. 21, 1921, the daughter of Robert and Edna Evans Moody.
She married Earl Hoover who preceded her in death on Oct. 10, 1967.
Leota was also preceded in death by a grandson, Kevin Littrell; a brother, Robert Moody; and two sisters, Lee Epstein and Marg Wills.
She worked as a clerk at Clark’s Sporting Good and Appliance, IGA and Irwin’s Mercantile.
She was truly a Christian woman who had a deep faith in our Lord. She could not always attend church, but she regularly watched church and religious shows on television. In earlier days she enjoyed gardening and flowers, reading, and arts and crafts.
Leota is survived by two daughters, Sherrill Littrell and husband Lee, and Judy Adams and husband Dennis; three sons, Larry Hoover, Steve Hoover and wife Cathy, and Dale Hoover; four sisters, Arvella Umphenour, Alice Vinson, Marilyn Miller and Winnie Moore; 10 grandchildren; 19 great-grandchildren; and five great-great-grandchildren.
Funeral service will be held at 11 a.m. Thursday, Sept. 21, 2017, at the Schneider Funeral Home and Crematory, Mound City Chapel. Visitation will be held one hour prior from 10 a.m. to service time at the Schneider Chapel. Burial will be in the Woodland Cemetery.
The family suggests contributions to the Mound City United Methodist Church. Online condolences for the family may be left at www.schneiderfunerals.com.