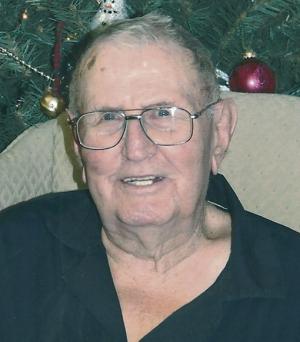 Lester L. Shaw, age 98, Pleasanton, Kan., passed away on Thursday, Dec. 15, 2016, at the Fort Scott Manor. He was born on Feb. 11, 1918, in Amoret, Mo., the son of Fred and Cora Mears Shaw.
He was employed as an operating engineer working most of his career with DiCarlo Masonry. Les was a member of the Mound City Christian Church and the Operating Engineers Local No. 101. He was an avid gardener, and liked to hunt and fish.
He was married to Marlene Ross on Dec. 24, 1938. She preceded him in death on Oct. 12, 1984. He later married Margaret Rees Lamb on June 25, 1988.
Les was also preceded in death by a daughter, Diane Elaine; and nine siblings, Charles, Chester and Claude Shaw, Effie Wilkerson, Mildred Freed, Leona Meintz, Gertrude McGuire, Gladys Shaw and Jewell Mitts.
He is survived by a son, Gerald “Jerry” Shaw and wife Janet; two daughters, Sharon Hedges and husband Steve, and Karon Miller and husband Richard; stepson Bill Lamb; and nine grandchildren, 23 great-grandchildren and a great-great-grandson to join the rest of the family shortly.
Funeral service was held Tuesday, Dec. 20, 2106, at the Schneider Funeral Home and Crematory, Pleasanton, with burial in the Pleasanton Cemetery.
The family suggests contributions to The Residencies Activity Fund. Online condolences for the family can be left at www/schneiderfunerals.com. Arrangements: Schneider Funeral Home and Crematory, Pleasanton Chapel.