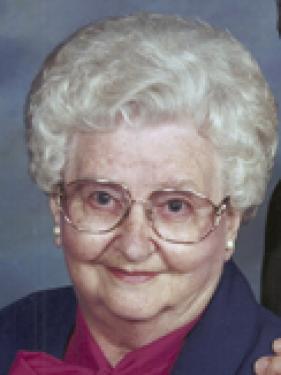 Lucy Mae Staton, 94, Pleasanton, Kan., passed away Friday, Dec. 12, 2014. She was born Dec. 13, 1919, at La Cygne, Kan., the daughter of Roland and Mae Johnston Coffel.
The family moved to Drexel, Mo., in 1922 and she attended Maple Grove School until 1925. In 1926, the family moved to Linn County and she attended Macedonia School and graduated from La Cygne High School. She later attended Fairchild’s Beauty School. She then worked for Della Teubner and Margaret White.
She married Leon Staton Jan. 24, 1949. They owned Leon’s Plumbing. She was a member of the Pleasanton Christian Church, CWF, serving as past president, a 65-year member of the Order of Eastern Star, serving twice as Worthy Matron, district aide, and holding several offices in the Hope Chapter 80 in Pleasanton. Lucy also enjoyed quilting.
She was preceded in death by her parents; a daughter, Brenda; four brothers; and three sisters.
She is survived by her husband, Leon; son, Eddy Staton and wife, Sharon; three daughters, Marilyn Peak, Reva Robinson and husband, Larry, and Debra Ellis and husband, Wayne; 13 grandchildren and 17 great-grandchildren.
Funeral service will be held 11 a.m., Wednesday, Dec. 17, 2014, at the Pleasanton First Christian Church. Burial will be in the Pleasanton Cemetery. The family suggests contributions to the Christian Church or American Kidney Foundation. Online condolences may be left at www.schneiderfunerals.com. Arrangements: Schneider Funeral Home and Crematory, Pleasanton Chapel.