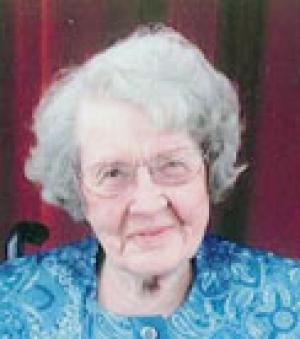 Marjorie Ruth (Conley) Prentice, 94, longtime resident of rural Parker, Kan., passed away at Vintage Park in Osawatomie on Sunday, June 7, 2015. Marjorie was born Feb. 9, 1921, near La Cygne, Kan., and was the oldest of seven children of Arthur Leonard Conley and Ruth Elizabeth (Hensley) Conley.
She spent her early years in Baca County, Colo., before moving back to rural Linn County, Kan., near La Cygne. She was a 1938 graduate of Parker Rural High School, Parker, Kan.
She married Eugene Warner Prentice on Feb. 2, 1941 in Kansas City, Kan. They made their home near Parker, Kan., and became the parents of three sons.
She was a lifelong member of the Parker United Methodist Church, a Life Member of the Parker Community Historical Society, and worked on the Election Board for many years.
She was preceded in death by her parents, her husband Eugene of 67 years and two brothers.
She is survived by her three sons, Kenneth E. and Sandra Prentice of Shawnee, Kan., Donald and Gail Prentice of Santa Paula, Calif., David and Diane Prentice of Upper Marlboro, Md.; four sisters; four grandchildren; five great-grandchildren; other relatives and friends.
Visitation will be held Saturday, June 13, 2015, from 6-8 p.m. at the Eddy-Birchard Funeral Home in Osawatomie, Kan. Funeral services will be held at 1:30 p.m. Sunday, June 14, 2015, at the Parker United Methodist Church in Parker, Kan. Burial will be in the Parker Cemetery.
Memorial contributions may be made to the United Methodist Women of Parker United Methodist Church, Parker Community Historical Society, or the Midwest Stem Cell Therapy Center at University of Kansas Medical Center.