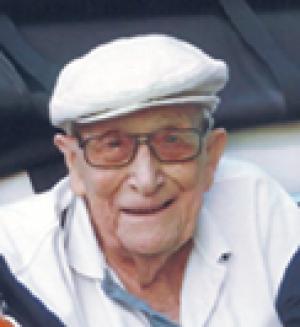 Marvin Alfred Meek, 95, most recently of Victory Hills Senior Center, Kansas City, Kan., passed away Sunday, Sept. 21, 2014, in Kansas City, Kan. Marvin was born Jan. 28, 1919, in Everton, Mo., to Mary Mel Steele and Josiah Alfred Meek.
At the age of two, his family moved to Eldorado, Kan., where he lived until he enlisted in the Army Air Corps in September of 1942, serving the weather corps in Northwest Territories, Canada.
While in Canada, he met his future wife, Dorothy (Kilpatrick) Cameron, in Edmonton. They were married Oct. 6, 1945. They would have celebrated their 69th anniversary next month.
After the war, he worked for the U.S. Weather Bureau in Wichita, Kan., before entering the insurance industry. He served as President of the Plainsman Chapter of the NCHA, and retired from Western Insurance Company.
He is survived by sons, Terry (Cathie) of Magnolia, Texas, Larry of Tonganoxie, Kan., Tom of Miami, Fla.; daughters, Joanel (David) Bell and Mary (Andrew) Krum, both of Lake of the Forest, Kan.; and many grandchildren and great-grandchildren.
He was preceded in death by his parents; his brother, Raymond; sister, Edith Wintz; and a stepson, Richard Cameron.
A private family graveside memorial service will be held at a later date at the Pleasanton Cemetery. The family suggests contributions to Children’s Haven International, 400 E. Minnesota Rd, Pharr, TX 78577. Online condolences for the family may be left at www.schneiderfunerals.com. Arrangements: Schneider Funeral Home and Crematory, Pleasanton Chapel.