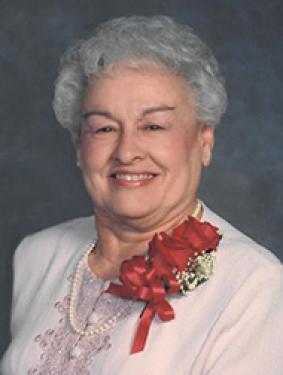 Ellen and Gene were longtime residents of Osawatomie, Kan., where they raised a family and owned Brownback Hardware, which Ellen managed. She was voted Woman of the Year by the Miami County Business and Professional Women’s Club, and was a member of PEO, Delta Epsilon Sorority, and Eastern Star. Ellen loved sewing and quilting, and playing cards with friends. As an active member of her church, Ellen’s faith was a very important part of her life.

Ellen and Gene enjoyed time at the lake, fishing and boating with family. After retirement they spent winters in Texas, New Mexico and Arizona, basking in the warmer climate.  Later, they moved to Ellsworth where they delighted in making new friends, spending time at the Ellsworth Senior Center, attending church and becoming involved in the community.

Ellen was preceded in death by her husband of 68 years, Gene Brownback; her parents; and her sister, Sarah Ann Stuart.

A private family inurnment will take place at Osawatomie Cemetery in Osawatomie, Kan.

Memorial contributions may be made to the Ellsworth County Food Bank c/o Parsons Funeral Home, Box 45, Ellsworth, KS 67439. Obituary can be viewed and condolences left at parsonsfh.com.