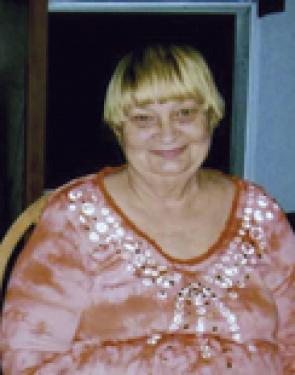 Mary Lorene Nash, age 76, La Cygne, Kan., passed away on Monday, Oct. 27, 2014. She was born on June 11, 1938, at Napoleon, Mo., the daughter of Allen and Amanda Murray Major. She graduated from Wellington High School.
Mary and George Nash were united in marriage on March 31, 1956, in Kansas City, Kan. He preceded her in death on Feb. 9, 2006. She was also preceded in death by a daughter Denise and her parents.
She helped George lay bricks for many years and then was a cook at the Swan Manor. Mary very much enjoyed celebrating the holidays with her family, especially Christmas. She liked to read, sew and craft.
She is survived by five sons, Keith, David, Jackie, Jeremy and Terry Nash; five daughters, Brenda Day, Marie Nash, Alice Warren, Kathy Querry and Amanda Nash; two brothers, Aubrey and John Major; five sisters, Leanna Smith, Rosie O’Dell, Wanda Thomas, Barbara Robinson and Roxie Williams; and 29 grand and 37 great-grandchildren.
Funeral services will be held 2 p.m. Thursday, Oct. 30, 2014, at the Schneider Funeral Home and Crematory, La Cygne Chapel. Burial will be in the Brooklyn Cemetery. Visitation will be held from 5-7 p.m. Wednesday at the La Cygne Chapel. The family suggests contributions to the Mary Nash Memorial Fund. Online condolences for the family may be left at www.schneiderfunerals.com. Arrangements: Schneider Funeral Home and Crematory, La Cygne Chapel.