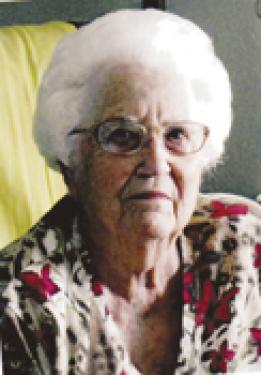 Maxine Smith, 90, La Cygne, Kan., passed away Wednesday, Oct. 29, 2014. She was born at Pleasanton, Kan. Jan. 10, 1924, the daughter of Leonard and Lessie Neill Gammon. She graduated from Pleasanton High School in 1942.
On Aug. 7, 1942, she married Joe Smith in Escondido, Calif. He preceded her in death on March 6, 2004.
She worked in the local grocery store for 27 years before retiring. She was a member of the Pleasanton Presbyterian Church. Maxine enjoyed traveling with her family to various destinations, including Washington, South Dakota, Colorado, Arizona, and many destinations in the United States. She placed others’ concerns ahead of her own, caring for many ill relatives. She loved hosting family functions and taking care of her grandkids. She was a seamstress who made quilts as well as clothing for her family.
Maxine was also preceded in death by a son, Chuck Smith; four brothers, Buck, Bill, Gene, and Dick Wilson; one sister, Leta Belle Martin; and a great-grandson, Brandon Ross.
She is survived by a son, Russel Smith; two daughters, Bonnie Ramsay, and Karon Farror; one sister, Bonnie Smith; and numerous grandchildren and great-grandchildren.
Funeral service was held Saturday, Nov. 1, 2014, at the Schneider Funeral Home and Crematory, La Cygne Chapel. Burial was in the Brooklyn Cemetery. The family suggests contributions to the Kansas City Hospice House. Online condolences for the family may be left at www.schneiderfunerals.com. Arrangements: Schneider Funeral Home and Crematory, La Cygne Chapel.