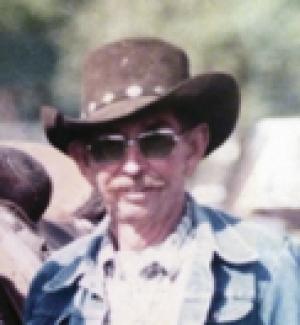 Merlin L. Ball, 93, a former resident of Blue Mound, Kan., and more recently of Osawatomie, Kan., passed away Saturday, Aug. 23, 2014. He was born March 10, 1921, at Blue Mound, Kan., the son of Forrest and Dora Price Ball.
He served his country during World War II in the United States Army Air Corps.
He married Mary Ann Atkisson in August of 1945. She preceded him in death Dec. 5, 2000.
Merlin was a farmer and rancher for most of his life. He worked for the Linn County Highway Department during the late 1970s and early 1980s. Upon retiring from Linn County, he returned to doing what he loved most – cowboying. He was able to continue into his mid 80s.
He was preceded in death by a granddaughter; four brothers, Donovan, Irvin, Gerald and Lawrence; and three sisters, Wilma, Media and Velma.
He is survived by a son, Maurice Ball and wife Sherry of Paola, Kan.; and three daughters, Rebecca Goodman and husband Lowell of Ottawa, Kan., Regina Broyles and husband Dwayne of Blue Mound, Kan., and Jan Paulseen of Kansas City, Mo.; nine grandchildren; and 20 great-grandchildren.
Visitation will be held from 5-6:30 p.m. Wednesday, Aug. 27, 2014, at the Schneider Funeral Home and Crematory, Mound City Chapel. Private inurnment will be at the Pleasant View Cemetery, Blue Mound. The family suggests contributions to the BHS Memorial Scholarship or Linn County Sharing Bucket. Online condolences for the family may be left at www.schneiderfunerals.com. Arrangements: Schneider Funeral Home and Crematory, Mound City Chapel.