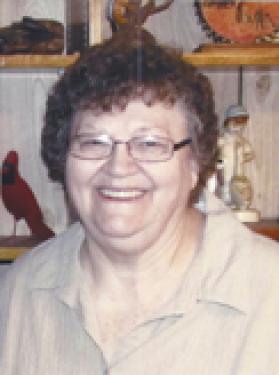 Charlene Curran, 75, of Bartlesville, Okla., passed away Monday, Aug. 11, 2014, at the Journey Home Hospice House of Bartlesville.
Mildred Charlene Artz was born Feb. 5, 1939, in Bartlesville to Charles Isaac Artz and Lahoma Hughes. The family lived in Bartlesville until Charlene was six, then they moved to Blue Mound, Kan. She attended the first six grades of school then moved back to Bartlesville where she attended the 7th grade. They next moved to Garnett, Kan., where she was in school her 8th grade year until she graduated with the class of 1957. That year, the Artz family moved back to Blue Mound. After graduating Charlene went to work at the Linn County Sheriff’s Office as a dispatcher.
On Oct. 8, 1960 she was married to James Darryl Curran at the Blue Mound Methodist Church. He preceded her in death on Dec. 31, 2013. To this union there were born four children, Charla Lou, Jimmie Dale, Joel Dane (who preceded her in death as an infant in 1966), and Scott Mitchell.
The Curran family lived in Blue Mound until moving to Bartlesville in 1976. While still in Blue Mound, Charlene was librarian for the public library. Upon moving to Bartlesville, she worked for U Totem, Reda Pump, Woolaroc Wildlife Preserve as a cook, the Dewey School District as a school cook, and at Phillips for Zachary Maintenance Company in the laundry department.
Charlene was an avid reader, was a genealogist researcher, wrote poetry and did cross stitch and needle point. She was a member of the Blue Mound United Methodist Church and was also proud of her Cherokee heritage.
She is survived by her children, Charla Lou Mann and her husband Gerry of  Bartlesville, Jimmie Dale Curran and his wife Karen of Broken Arrow, Okla., Scott Mitchell Curran and his companion Heather White of Bartlesville, Okla.; seven grandchildren, Jennifer Curran of Tulsa, Okla., Greg Curran of Broken Arrow, Okla., Kaylee Curran and her companion Mark Hainline of Bartlesville, Okla., Emma Peterson, Camber Peterson, Travis Peterson and Jack White of Bartlesville, Okla.; and one great-grandson, Wyatt Hainline of Bartlesville, Okla.
Funeral services for Mrs. Curran were Saturday, Aug. 16, 2014, in the Stumpff Funeral Home Chapel with Chaplain Keith Fallis officiating. Graveside services were held at the Sunny Slope Cemetery at Blue Mound, Kan., and directed by the Stumpff Funeral Home & Crematory.
Honorary casket escorts included Jason Curran, Michael Greg Curran, Mark Hainline, Michael Curran, Steve Curran, Jason Hinsdell, Steve Early, Clay Thurman, Don Eckert and Gary Artz.
Memorial funds have been established and those who wish may send their contributions to the Journey Home Hospice House, 3406 S.E. Kentucky, Bartlesville, OK 74006 or to Cornerstone Hospice, 3414 S.E. Kentucky, Bartlesville, OK 74006.
Friends may sign the online guest book and leave condolences at www.stumpff.org.