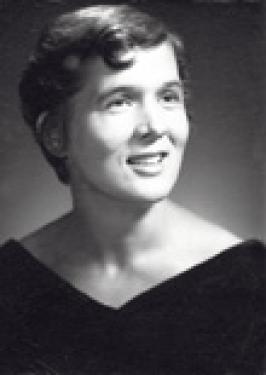 Former Pleasanton resident Millicent Gladys (Rea) La Berge, 91, died Friday, Sept. 16, 2016, at the home of her daughter, Laura Rea, in Highlands Ranch, Colo., with Laura,  daughter Lorita Groover and her grandson, Spencer Wilson, by her side.

She was born Dec. 30, 1924, in Mattydale, N.Y., in the home of her parents Louis J. La Berge and Gladys S. Skipper. Her mother was a native of Castle Acre, England, and her father was a Frenchman from Quebec, Canada. Millicent was proud of her immigrant parents and their accomplishments.

She was a United States Marine, a mother of 11 children, including Millicent Lindauer, Henry Rea, Jonathan Rea, Melissa Rea, Marc Rea, Lyman Rea, William Rea, Kelcey (Rea) Kenney, Lorita (Rea) Groover (Dewey Groover), Laura Rea (Robert Wilson) and Nathaniel Rea. She had three sets of twins: Henry and Jonathan, Melissa and Marc, and Kelcey and William. As a mother, she had six children under the age of 5 years.

She was married for 22 years to Reo V. Rea who often times worked in the eastern United States pursuing a career in the Department of Defense. She raised her children in the Pleasanton area singlehandedly during these times and later after their divorce in 1975. In 2004 she moved to Nemo, Mo.

As a toddler, she showed compassion to neglected animals, and this continued her entire life. She rescued and also fed abandoned animals. She generously gave of herself and shared her personal resources with those in need.

After her nursing education, Millicent was moved by patriotism and her friends dying in World War II and enlisted in the United States Marines, doing basic training at Camp Lejeune, N.C. After the war, she received training as an airline reservationist in California.

In order to spend the most time with her family, Millicent often worked the night shift. She worked as a nurse in hospitals, nursing homes and in the home health care settings. Her cherished patients called her “Sunshine.”

As a devoted mother, Millicent also worked in other fields such as the Motorola Co.; as a blue printer for the U.S. Government Printing Office, Washington, D.C.; in childcare; and in the retail and restaurant industry. She also was caregiver for her mother during her lengthy illness.

She was an inspiration to her children and several have chosen careers in public service.

While pursuing a bachelor’s degree in her late fifties and early sixties, she and several of her children were studying at Pittsburg State University, Pittsburg, Kan., at the same time. In 1985 she graduated with a Bachelor of Science in Administration of Criminal Justice from Wichita State University.

Upon graduation, she experienced age discrimination as she pursued work in the Kansas State Criminal Justice System. Though she scored high on the entrance exams, she was denied interviews and was never hired, which was in violation of Kansas state law. This was deeply disappointing to her as she was interested in rehabilitation of prisoners.

Even in the later years of her life, Millicent was a humanitarian. In 1994, at the age of 71, she traveled to the country of India as a volunteer worker with Habitat for Humanity. She mixed by hand the mortar for the bricks used in the construction of homes.

Millicent never got over the loss of her children, Kelcey, Nathaniel and Jonathan. Her daughter, Kelcey (Rea) Kenney, was hit and killed, along with her grandson, Justin Kenney, by a drunk driver in El Paso, Texas, in June of 1987.

Her son, Nathaniel Rea, was killed in a blizzard near Eureka, Kan., in January of 1997. He had been visiting his mother for Christmas and was returning home.

Jonathan died of lung cancer in January of 2006 in Palisade, Colo.

Her eight surviving children, numerous grand and great-grandchildren live across the United States. Her only surviving sibling, sister Mina Case, lives in Mattydale.

She was preceded in death by her parents and three sisters, Suzanne Symer, Regina La Berge and Marie La Berge.

As a champion for animal rights, Millicent chose to encourage contributions to organizations promoting their welfare.

Graveside services will be held at 2 p.m. Friday, Sept. 23, in the Pleasanton Cemetery, Pleasanton. Military honors will be provided. Services are under the direction of the Cheney Witt Chapel, Fort Scott, Kan. Words of remembrance may be submitted to the online guestbook at cheneywitt.com.