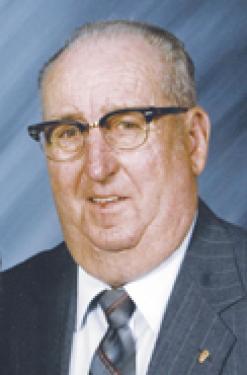 Orville Wesley “Bud” Rogers, 92, of Iola, Kan., died Friday, Dec. 12, 2014, at Allen County Regional Hospital in Iola, Kan.
Orville was born June 27, 1922, in Ericson, Neb., the son of Thomas Orville and Lillie Leota (Platt) Rogers. In 1927, he moved with his parents to a farm halfway between Blue Mound and Kincaid, Kan. Bud graduated from Kincaid High School in 1941 and served with the U.S. Army Air Corps during WW II.
On Dec. 10, 1942, he married Margaret Ellen Mitchell. They made their home on a farm northeast of Selma. Bud farmed for 45 years before retiring and moving to Iola in 1992. He was a lifetime member of the Kincaid V.F.W. and a member of the Kincaid Selma United Methodist Church.
Survivors include his wife of 72 years, Margaret Ellen; two sons, Gary Rogers and wife, Peggy of Kincaid and Neil Rogers and wife, Nancy of Blue Springs, Mo.; one daughter, Carolyn Carstedt and husband, Ed of Cherryvale; nine grandchildren; and 18 great-grandchildren
He was preceded in death by his parents; an infant brother, Melvin; two sisters, Fern Jones and Marjorie Clark; and a great-grandson, Connor Underwood.
Service was held Monday, Dec. 15, at the Kincaid Selma United Methodist Church in Kincaid with burial following in the Kincaid Cemetery.
Memorials are suggested to Kincaid Selma United Methodist Church or to the Wesley United Methodist Church.
To sign the guestbook online or to leave a condolence go to www.iolafuneral.com.