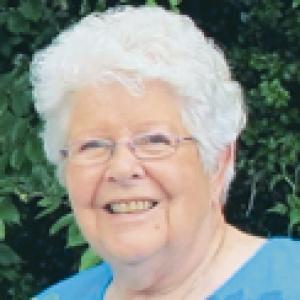 Osee Ellen (White) Riggs, Parker, Kan., was born July 8, 1933, and went home to be with the Lord March 17, 2015, with her husband John by her side.
Osee and John were high school sweethearts at Parker High School, where Osee was a cheerleader and involved in many school clubs and extracurricular activities. Osee and John were united in marriage Dec. 17, 1950, and were blessed with six children. Osee and John made their home in Kansas City, Kan., where they raised their family.
Osee worked as a paraprofessional for the Kansas City, Kan., school district working with special needs children. She was involved with Boy Scouts of America, and Special Olympics. Osee enjoyed quilting, sewing and crochet. She made many beautiful quilts that are treasured by her family. Osee was a marvelous cook and her home was open to a multitude of friends throughout the years. Osee enjoyed gardening, both vegetables and roses, and she took pride in her exceptionally well kept house.
In 1992 Osee retired from Humana and she and John moved back to Parker and built a home on the family farm. Osee was very active in the Parker community, volunteering for Boy Scouts, the Parker museum, the Parker Historical Society, the local food pantry and the Parker United Methodist Church, where she was a member of the women’s group. Osee spent a life in service to others, and she never met a stranger. She was the giver of a million hugs.
Osee was preceded in death by her parents Ernest and Velma White and daughters Linda and Nancy.
She is survived by her husband, John, of the home; sons John III (Molly) of La Cygne, Kan., Joseph (LaVeda) of La Cygne, Kan., James (Sarah) Fort Scott, Kan., and Jeffrey (Kristin) of Louisburg, Kan.; brother, Carl White (Jean) of Parker, Kan.; sisters, Alice Frear (Carl) of Princeton, Kan., and Doris Satchell of Parker, Kan. Osee is also survived by her loving grandchildren, Jo Anne Bair, Joshua Riggs, Erika Laney, Justin Riggs, Jessica Stiles, Joey Riggs, RaeAnna Riggs, Jedidiah Riggs, Billy Gooderl, Julie Burk, and Jesse Funk, in addition to 20 great-grandchildren and many nieces and nephews.
Services were Saturday March 21, 2015, at the Parker United Methodist Church. Graveside services were held at Cadmus Cemetery. Memorial donations may be made to Boy Scouts of America.