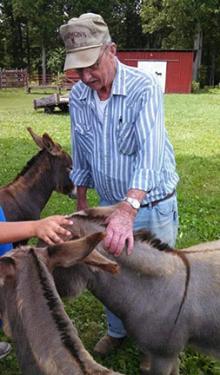 Paul Russell Slater, age 90, formerly of Pleasanton, Kan., passed away Thursday, June 3, 2021, in Olathe, Kan. Paul was born the son of John and Ethel Ison Slater on Aug. 15, 1930, at Pleasanton. He graduated from Pleasanton High School and married Barbara Thomas on Jan. 9, 1955, in Pleasanton, to this union three children were born, Rodney, Jane and Jon, they preceded him in death. Over the years Paul worked as a coal miner, oil rig worker and operated large drag lines for the mining companies. He enjoyed fishing and going hunting with the Payne's, he also owned a donkey farm, was a very talented woodworker and an avid coffee drinker.

A graveside service will be held at 2 p.m., Wednesday, June 9, 2021, at the Pleasanton Cemetery. Visitation will be from 6 to 8 p.m., Tuesday, June 8, 2021 at the Schneider Funeral Home and Crematory, Pleasanton Chapel. Online condolences may be left at www.schneiderfunerals.com.