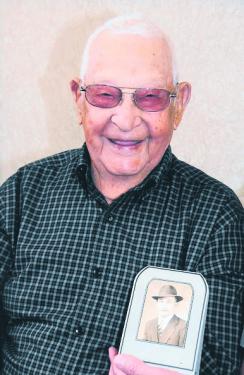 Raymond Miller, age 100, La Cygne, Kan., passed away on Saturday, Oct. 31, 2015, at Miami County Medical Center, Paola, Kan. He was born Dec. 7, 1914, at New Lancaster, Kan., the son of David and Lula Schaefer Miller.
He married Beulah Marquis on Feb. 5, 1942. He worked as a farmer, rancher and dairyman. He served his country in the U.S. Army during World War II.
Raymond was a member of the La Cygne United Methodist Church, American Legion and was a 4-H leader. Raymond will be fondly remembered for driving his John Deere Gator around La Cygne and giving his grandchildren rides.
He was preceded in death by his parents; wife; a sister Hazel; and an infant sister.
Raymond is survived by his daughter Joyce Stainbrook and husband, Terry; brother Thurman Miller and wife, Susie; two grandchildren Tara Allen and husband, Chad and Scott Stainbrook and wife, Heather; and five great-grandchildren Brooke, Bree, and Kate Allen and Benton and Brady Stainbrook.
Funeral service will be 3 p.m. Wednesday, Nov. 4, 2015, at the Schneider Funeral Home La Cygne Chapel. Burial in the Oak Lawn Cemetery. The family suggests contributions to the International Retts Syndrome Foundation (IRSF) or the La Cygne United Methodist Church. Online condolences for the family may be left at www.schneiderfunerals.com. Arrangements: Schneider Funeral Home and Crematory, La Cygne Chapel.