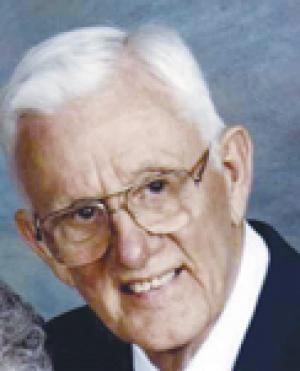 Reverend Howard Ray Curry, 93, La Cygne, Kan., passed away Friday, Dec. 12, 2014. He was born at Mulberry, Kan., March 29, 1921, the son of William and Pauline (Gary) Curry.
He married Ruth Lee on Oct. 7, 1942. He served his country during World War II in the United States Marine Corps.
Howard worked in education as well as in ministry. He was a school teacher, principal, basketball coach and superintendent. He ministered at various churches including Cherry Grove, Paola, Spring Hill, and finished his preaching career at Calvary Baptist in La Cygne.
He was preceded in death by a daughter, Joy Quinones; his parents; a brother, Rolly; and a step-granddaughter.
He is survived by his wife, Ruth; three sons, Robert Curry, William Curry and Howard Curry Jr.; two daughters, Julia Fisher and Janet Davis; two brothers, Irvin and William Curry; 13 grandchildren; 25 great-grandchildren; five great-great-grandchildren; seven step-grandchildren; and 15 step-great-grandchildren.
Funeral service will be held at 10 a.m., Saturday, Dec. 20, 2014, at the Calvary Baptist Church in La Cygne. Burial will be in the Oak Lawn Cemetery. Visitation will be held from 5 to 7 p.m. Friday at the Schneider Funeral Home and Crematory, La Cygne Chapel. The family suggests contributions to the Calvary Baptist Church. Online condolences for the family may be left at www.schneiderfunerals.com. Arrangements: Schneider Funeral Home and
Crematory, La Cygne Chapel.