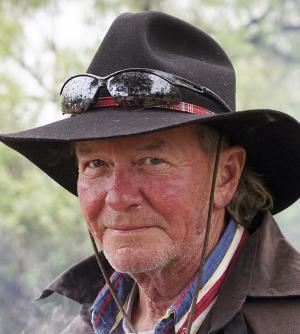 He grew up in Olathe and Paola, Kan., later moving near Branson, Mo., where he built roller-coasters for Silver Dollar City, joined a group of cowboys, rode stagecoach, and did charitable work with children. One of his favorite things to do was giving a cowboy hat to a kid.

Rick was preceded in death by his father Harvey LaMar; sister Ruth Marie LaMar Fuller; and by Chere’ Keithley.

Rick was a cowboy, so don’t dress up for his funeral. Instead of flowers, we suggest contributions to www.cowboyswhocare.org. Scroll to Latest News for Wrangler Rick LaMar; click tab to donate in his memory.

Services will be by Schneider Funeral Home, La Cygne, Kan., on Saturday, April 20. Visitation will be at noon, funeral at 1 p.m. Burial will immediately follow, Brooklyn Cemetery, La Cygne.