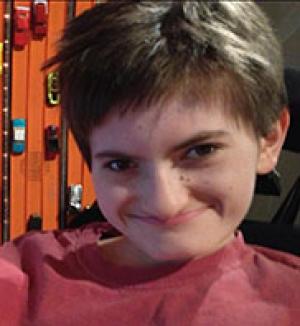 Robert was born on March 19, 1998, in Lexington, S.C., to parents Robert L. Secrest and Deborah J. (Bilodeau) Secrest.   Affectionately known as “Little Robert,” he resided in several states throughout his lifetime including South Carolina, Illinois, Michigan, California, and most recently Connecticut.

Although Robert had several challenges stacked against him throughout his life due to cerebral palsy and congenital hydrocephalus, he was an extraordinary young man. He was more well traveled at 9 months old than most adults! Although he was unable to communicate verbally, he was an expert communicator in every other way! As he grew into his teenage years, Robert would speak volumes with a hearty giggle, an eye roll, or a good yank of his sister Elizabeth’s hair. As a teenager, Robert underwent several hip surgeries followed by extensive physical therapy. After many months of therapy, he walked for the first time, with a little enticing by his favorite toys -Elmo and Slinky.

Throughout his life, Robert continued to defy the odds. His favorite vacation spot was Disney. A daredevil at heart, Robert’s favorite amusement park ride was Tower of Terror. He also had a special bond with animals of all kinds. He had the opportunity to swim with dolphins and even sharks; he held a lion cub, baby kangaroo, and an alligator. Birds and butterflies would flock to him. Robert was also a NASCAR enthusiast, especially a fan of Dale Jr., #88, and Jimmie Johnson, #48. Robert loved riding in anything fast with a loud V8 engine roaring. He was even a member of the Pratt Miller Corvette Race Team.

In addition to his parents, Robert is survived by his sister, Elizabeth Secrest, also of Newtown. He leaves behind several aunts, uncles, and cousins. He was also the grandson of the late Stephen G. Bilodeau, Madeline Bilodeau, Robert J. Secrest, and Louetta G. (Cox) Secrest.

Memorial contributions may be made in Robert’s name to: Ann and Robert H. Lurie Children's Hospital of Chicago Foundation. Please visit https://secure3.convio.net/cmf/site/SPageServer?pagename=donate_main