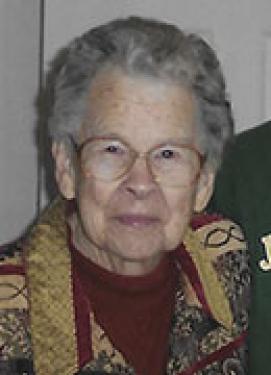 Rosa was a hard working homemaker, wife and mother. She was a member of the Blue Mound Federated Church and the Women's Auxiliary, the Stitch and Chatter Club and the American Legion Auxiliary. She was preceded in death by her husband George on Feb. 12, 1995. She was also preceded in death by her parents; an infant son, Calvin; three brothers, Loren, Ralph and Raymond Wilson; two sisters, Louise Lawrence and Shirley Miller, and a step-sister, Catherine Webb. Rosa is survived by a daughter, Linda Jane Davis; two sons, Charles and Curtis Sutterby; a sister, Jo Riley; four grandchildren, Ryan and Caleb Sutterby and Wes and Cal Davis; and eight great-grandchildren, Caleigh, Crew and Cajer Sutterby, Mitchell and Brett Sutterby, Blake Hixson and Nat and Lane Davis.

A private family graveside will be held at the Mapleton Cemetery. Individual respects and guest registry can be made Thursday, April 23, 2020 from 8:30 a.m. to 5 p.m. at the Schneider Funeral Home and Crematory, Mound City Chapel. Contributions are suggested to the Blue Mound Federated Church. Online condolences are encouraged and may be left at www.schneiderfunerals.com.