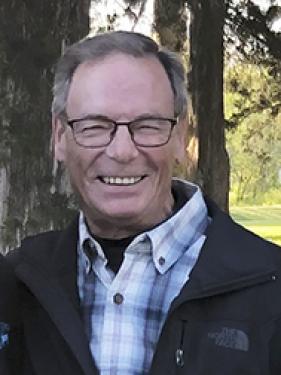 Roy was a kind and loving husband to Sherrie for 47 years, meeting in Collinsville, Okla., and marrying on May 11, 1974. Roy was a man of God, baptizing every one of his children and grandchildren. His family often referred to him as the "Bible scholar." As a passion for God's word, he knew his Bible beginning to end. He raised and taught his family to know and trust in the Lord through the good times and the bad times. As he got sick they often asked him "how do you remain so grounded?" His response was always "God is in control and always has a plan." He always showed compassion and grace. Grudges were something Roy didn't do.  "Superhero" is an understatement his family says. Roy was the king of "dad" jokes. He could always make an entire room crack up with his dry humor and typically with a straight face. Just like he dealt with his experiences in life, he also managed his illness with strength and grace. In his final moments he was surrounded by his wife and three children who looked up to him as their best friend, their hero and their rock. Roy worked for Kansas City Power and Light for 36 years. During his career at the plant, he started in the coal yard eventually working his way up, becoming a licensed electrician. Roy stated many times to his family, “I truly enjoyed what I did, and even though I worked countless hours, I got to do something I enjoyed and it never seemed too bad.” Working hard was truly his second nature, but he also liked to play hard too. His ultimate hobby was raising bluetick coonhounds which he started in the early ‘80s. Roy's accomplishments in competition coon hunting started in 1982 winning the Kansas State Show with a dog named Tanny. Later on, he won the biggest bluetick hunt in the nation, National Bluetick Days King of Hunt with his bluetick Smoke in 2012 and then repeated this once in a lifetime feat in 2015 with Smoke's son, Deal. In 2017 he put the icing on the cake winning the National Bluetick Reunion King of Hunt with the same bluetick, Deal. He started breeding and hunting "Mad Dog" blueticks in ‘82 and was still hunting the same line of "Mad Dogs" today. Roy and his son Timmy hunted together for almost 30 years. The pleasure and competition hunts are too many to mention, hunting in several states all across the nation and making friends at every one along the way. Roy enjoyed horses throughout his lifetime, riding Tennessee Walking Horses in his younger years, later developing his love for team roping. His children have many memories of Friday nights at saddle club that extended to his grandchildren and great-grandchildren. Many 4-H horse shows in the summer with Roy helping to groom and prep all the kids’ horses for shows, sweating his butt off and rarely showing frustration because, at the end of the day, he was having just as much fun as the kids were.

Funeral service was held Tuesday, March 30, 2021, at the Schneider Funeral Home and Crematory, Pleasanton Chapel, burial in the Littell Cemetery. Contributions are suggested to the Fairmount Community Association.  Online condolences can be left at www.schneiderfunerals.com.