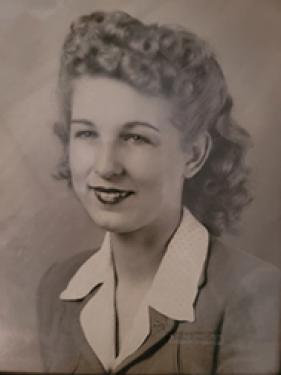 Ruth Jean Rhynerson, age 96, La Cygne, Kan., passed away Friday, Feb. 19, 2021. She was born on Oct. 8, 1924, in Mound City, Kan., the daughter of Walter “Buck” and Ida Simmons Smith. She graduated from Mound City High School in the Class of 1943. She was united in marriage to Charles Edward Rhynerson, while he was home on leave during World War II, on April 18, 1944. During the war she was employed at Key Industry in Fort Scott, Kan. She also worked at Braemoor’s Sewing Factory, cooked for the La Cygne and Prairie View schools, and took care of things around the farm, including milking the cows when her husband was on the road working. Ruth was a member of the Calvary Baptist Church and the Fiddlers and Pickers. She enjoyed playing piano, gardening, playing Canasta, sewing, quilting and crocheting. She made numerous Angel Food cakes for many different birthdays.

Funeral was scheduled for 2 p.m. Tuesday, Feb. 23, 2021, Calvary Baptist Church, La Cygne, burial to follow in Star Valley Cemetery, and visitation at 12:30 p.m. to service time at the church. Individual respects and guest registry were to be 9 a.m.-5 p.m. Monday, Feb. 22, 2021, Schneider Funeral Home, La Cygne Chapel.  Contributions are suggested to the Wounded Warrior Foundation. Online condolences can be left at www.schneiderfunerals.com.