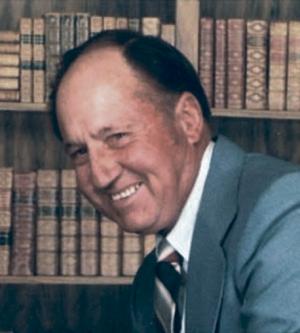 Sheldon Sterling Stoughton, 93, passed away peacefully on June 18, 2017, at the Prescott Country View Nursing Home. Entering the world on June 12, 1924, in Mapleton, Kan., Sheldon was the last of six children born to Frederick and Mary Stoughton.
Preceding him in death were his siblings, Bernice, Raymond, Milton and Ellis. His sister, Pauline Beeler, survives him.
Sheldon married the love of his life, Dorothy Jean Coppage, right before the Army sent him to Germany to serve our country during WWII. Their marriage of 47 years ended way too soon with Dorothy’s death in 1991.
Sheldon was proud to be a farmer but being the unique individual that he was, he was never a typical farmer. His menagerie of animals included buffalo, ostrich, llamas, rams and bucks, along with the cows and pigs.
Sheldon is also survived by his three children, Gregory Stoughton of Prescott, Kan., Shelda Kay Ficklin of Austin, Texas, and Cheryl Hilger of Lake Angelus, Mich., and their spouses; five grandchildren; and five great-grandchildren.
His independent spirit, his love of animals and his unique sense of humor will be remembered by all who knew him.
A graveside service will be held at Pleasanton Cemetery at 10 a.m. Saturday, June 24.
In lieu of flowers, the family requests donations to Mercy Hospice, or a charity of your choice. Condolences may be left at www.schneiderfunerals.com. Arrangements: Schneider Funeral Home and Crematory, Pleasanton Chapel.