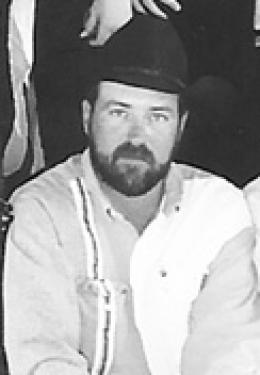 Tony Lee Fenster, 47, formerly of Holdrege, Neb., passed away Tuesday, Jan. 13, 2015, at Louisburg Healthcare and Rehabilitation in Louisburg, Kan. His passing was an indirect result of injuries sustained from a severe auto accident in August 2003.
Tony was born Aug. 17, 1967, in Holdrege, the oldest of five children from Dallas and Carol Fenster. He graduated from Holdrege High School with the class of 1985, and immediately after high school joined and proudly served in the Army National Guard. Tony studied agriculture at McCook Community College, where he received an Associate of Applied Science Degree in May 1987. Following his education, Tony embarked on a career in livestock production. He was employed by several cattle feedlots in south-central Nebraska, most recently as an assistant manager at the West Lot for Phelps County Feeders in Bertrand.
In 1991, Tony married Melissa Japp of Guernsey, Wyo. To this union two sons were born, TeJay Lee Fenster and Ty Lee Fenster. Tony’s boys always came first to him, and he took great pride in raising his sons to be dependable and knowledgeable cattle hands like their father.
A true cowboy his entire life, Tony was particularly fond of horses. He broke and trained colts in his spare time, and also bred, raised and showed quarter horses. Competing in local rodeos and roping with friends were two of Tony’s favorite pastimes. He also enjoyed hunting and fishing, being outdoors and treasured any time spent with his family. Tony was hard working, an excellent teacher and a genuine role model. He regularly went above and beyond to ensure a job was done right or to help out a friend. A loving father, brother and son, he will be greatly missed by all those fortunate enough to have known him.
Tony was preceded in death by both his maternal and paternal grandparents. He leaves to mourn his passing two sons: TeJay Fenster of Ainsworth and Ty Fenster of Thedford; parents, Dallas and Carol Fenster of Linn Valley, Kan.; four siblings, Brenda Ries of Mount Tabor, N.J., Angela Moore of Olathe, Kan., Randy Fenster of Gillette, Wyo., and James Fenster of Rolla, Mo.; as well as a host of nieces, nephews, aunts, uncles, cousins, other relatives and friends.
Visitation was held Sunday, Jan. 18, 2015, at the Nelson-Bauer Funeral Home in Holdrege, with funeral services at the same location Monday, Jan. 19, 2015. Following the traditional funeral, cremation took place and a private family inurnment will occur in the Oxford Cemetery at a later date.
In lieu of flowers, the family asks that you consider making a donation in Tony’s honor to pediatric cancer research at the Weill Cornell Children’s Brain Tumor Project. Donations can be made payable to Weill Cornell Medical College and sent to:
Weill Cornell Brain and Spine Center
Attn: Ana Ignat, Department Administrator
525 East 68th Street, Box 99
New York, NY 10065
Donations can also be made online directly at www.childrensbraintumorproject.org <http://www.childrensbraintumorproject.org. Please be sure to include “Tony Fenster” in the memo of your check, or in the tribute area of the online form.
The family also wishes to thank the many skilled medical staff and caregivers who have assisted Tony and supported their family since the 2003 auto accident. Their unwavering devotion to providing Tony with the highest quality of care possible has been sincerely appreciated.