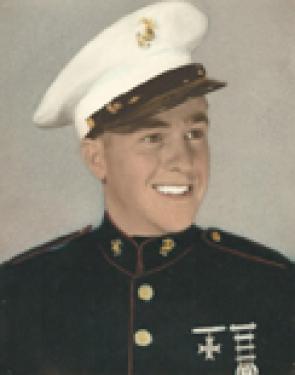 W. Glen Lindsey, 91, Pleasanton, Kan., passed away Thursday, June 19, 2014. He was born Feb. 17, 1923 at La Cygne, Kan., the son of William and Ethel Shrake Lindsey. He graduated from La Cygne High School.
Glen proudly served his country in the United States Marine Corps during World War II as an aircraft mechanic.
He married Lilah Hall at Santa Rosa, N.M. She preceded him in death on Sept. 25, 2003. He was also preceded by his parents; and two brothers, Jack and Vaughn Lindsey.
He worked for General Motors, and as an auto mechanic, carpenter and auctioneer. He was a lifetime member of the V.F.W. also, a member of the Pleasanton Presbyterian Church and attended the Calvary Baptist Church.
He is survived by two sons, John and Richard Lindsey; a sister, Jean Allen; special friend, Kate West; four grandchildren, Walker, James, Joshua and Jessica; and five great-grandchildren, Titus, Eli, Hugh, Havyn, and Tot.
A funeral service was held Monday, June 23, 2014 at the Schneider Funeral Home and Crematory, Pleasanton Chapel. Burial followed in the Pleasanton Cemetery. The family suggests contributions to Calvary Baptist Church. Online condolences for the family may be left at www.schneiderfunerals.com. Arrangements: Schneider Funeral Home and Crematory, Pleasanton Chapel.