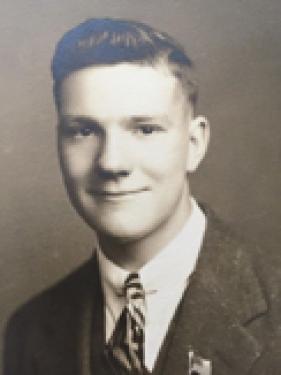 Wayne P. White, age 88, Oklahoma City, formerly of Mound City, Kan., passed away on Monday, April 6, 2015. He was born on Sept. 6, 1926, in Kansas City, Kan., the son of Raymond P. and Alice Howell White.
He graduated from Wyandotte High School and attended St Louis University. Wayne served his country during World War II in the United States Army. He retired from Kansas Gas Services after many years of employment.
He and first wife Betty had three children.
He later married Hilda Bryant on Dec. 21, 1957. They moved to the Mapleton, Kan., area in the mid 1970s.
Wayne was involved in the Optimist Club of Kansas City, Kan. He was a member of Mound City First Baptist Church and attended Mustang Baptist when he moved to Oklahoma City in 2012.
He was preceded in death by his parents; one brother, Thomas White; a sister, Betty Cordill; and wife Hilda who passed on July 21, 2008.
He is survived by five sons, Mike White and wife Peggy, Roger White and fiancé Shelly, Christopher White and wife Jennifer, Paul White and Jerry White; five daughters, Nancy Bracken, Darcey Vogel, Linda Burke, Cathy Martine and Debbie Shubert and husband Gary; and 20 grandchildren and 20 great grandchildren.
Funeral service will be held 10:30 a.m. Friday, April 10, 2015, at the Mound City First Baptist Church. Burial will be in the Curry Cemetery. Visitation will be held from 5- 7 p.m. Thursday at the Schneider Funeral Home and Crematory Mound City Chapel. Contributions are suggested to First Baptist Church. Online condolences for the family may be left at www.schneiderfunerals.com. Arrangements: Schneider Funeral Home and Crematory, Mound City Chapel.