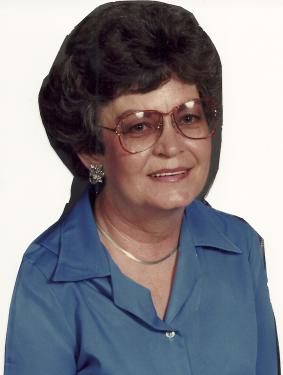 The death of Willa Dean Kerns Creager, age 77, of Pleasanton, Kan., means the passing of a wonderful Irish mother. Willa was born at La Cygne, Kan., on Aug. 21, 1937, the younger of two daughters born to Jess and Bessie McGinnis Kerns. She graduated from La Cygne Rural High School in the Class of 1956.
She was united in marriage to William H. Hampson on Oct. 20, 1956. They were blessed with four beautiful daughters. Willa and Bill raised their four daughters on a farm west of Paola, Kan. She then worked in the health care industry.
Real heroes are people who do ordinary things extraordinarily well. Willa loved taking care of her family on the farm. She kept an immaculate and well decorated home. Her family was fed delicious and nutritious meals from gardens, orchards and their own beef, chickens and dairy cows. She raised her children in the church, playing the organ and singing with her beautiful angelic voice. With only one arm, the other weakened by polio as a child, she accomplished being a farmer’s wife, mother of four children and so much more. She was known for her culinary skills, fruit cobblers, homemade bread and her beautiful smile. After raising her children, she became an accomplished clogger, line dancer and oil painter.
She was preceded in death by her parents; her premature son RonaldLee Hampson in 1957; her grandson Jeremy Sherman Moody in 2004; and brother in law Gene Rockwell.
She is survived by four daughters: Nancy Player and husband Jim, Marsha Windisch, Lanette Silvey and husband Dale, Billie Jo Knowles and husband Danny; one sister Esther Rockwell; 20 grandchildren, Lisa Lenzen, Emily Brown, Joy Davila, Kyle Windisch, Kristina Sulivan, Greg Windisch, Joseph Windisch, Shawn Windisch, Wesley Windisch, Jessica Diskson, Allyssa Knowles, Meagan Knowles, Dylan Knowles, William Knowles, Laura Knowles, Luke Knowles, Cierra Knowles, Chloe Knowles and Matthew Knowles; 16 great-grandchildren; and cousins John McGinnis, Shirley Gomerdinger, Dorothy Presson, Don, Loren and Dick Stewart and Barbara Bensen, Rosetta Beard, Gary and Marvin Creager and Glenda Borgelt.
Funeral services will be held 10 a.m. Saturday, July 11, 2015, at the Schneider Funeral Home and Crematory, La Cygne Chapel. Burial will be in the Oak Lawn Cemetery. Visitation will be held from 9 a.m. until service time at the Chapel. Contributions are suggested to Mercy Hospice. Online condolences for the family may be left at www.schneiderfunerals.com. Arrangements: Schneider Funeral Home and Crematory, La Cygne Chapel.