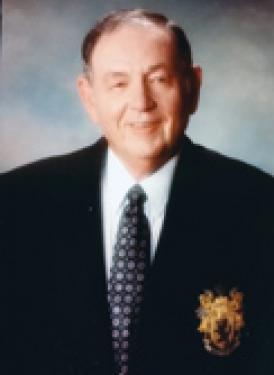 Bill is preceded in death by his father and mother, John William and Jessie Ellen.

Bill was born at home near Linville, Kan., on June 14, 1933. He graduated from Mound City High School in 1951 and went on to Kansas State University. Shortly thereafter, he served his country in the United States Air Force for four years. It was during this time that he trained soldiers in Enemy Escape and Evasion tactics.

He was a seed and chemical salesman and coached the Mound City Colts baseball team to a tournament win. Also, he worked as a farmer and stockman on the family farm until his death. Bill was a school board member of Mound City and was instrumental in the creation of the Jayhawk School District, where he also served on the board.

Over the years, Bill was involved in many organizations. He was a member of the Rising Sun Masonic Lodge in Fort Scott, Kan.; the Scottish Rite in Fort Scott; the Mirza Temple Shriners in Pittsburg, Kan.; the American Legion in Olathe, Kan., and Pittsburg; and the Moose Lodge in Topeka, Kan. He enjoyed being a part of parades as a Shriner driving his MG and occasionally dressing up as a clown for local parades. However, on any given weekend, he could be found dancing the night away. This was one of his true passions in life.

Above all else, he loved his family and was most proud of them.

In lieu of flowers, memorial donations may be made to the Shriners Hospital for Children. Condolences for the family may be offered online at schneiderfunerals.com.