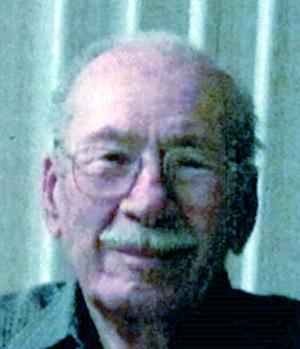 He attended his eight years of elementary school at rural Kincaid, southwest of Mound City, and graduated from Mound City High School in 1942.

Following high school, he drove for Vess Cola, Pleasanton, owned and operated his own truck line, worked on the assembly line at the B O Plant in Kansas City, and had a Kansas City Star route. For many years he worked at the Sunflower ammunition plant, then Gracy Electric Co. of Olathe. For 19 years he was the head electrician for the Olathe School District, retiring in 1988 and returning to Mound City to help build a new home on the 20 acres that he and his wife Rubie had cleared.

Community was important to Bill. He was a member of the Olathe United Methodist Church and the Mound City United Methodist Church, an active member of the Republican Party serving as a precinct person for many years, and he and Rubie were instrumental in organizing the Mound City Medical Foundation. Ever the outdoorsman, Bill enjoyed camping, fishing, gardening and mowing the lawn. Always a people person, Bill enjoyed spending time with family and friends whether sharing his garden produce, playing a game of cards or cribbage, or just visiting. Bill was also an avid bird and deer watcher. After retirement, Bill and Rubie traveled on bus tours to all 50 states, all provinces of Canada, the Islands, Mexico and many other countries.

Survivors include his loving wife, Rubie, of the home; and many nieces, nephews and friends.

Contributions in memory of Bill may be made to any of the following: Care to Share, Mound City Medical Foundation or the Mound City United Methodist Church Funeral Dinner Fund. Donations may be mailed to the funeral home, P.O. Box J, Mound City, KS 66056. Friends and family may leave online condolences at www.schneiderfunerals.com.