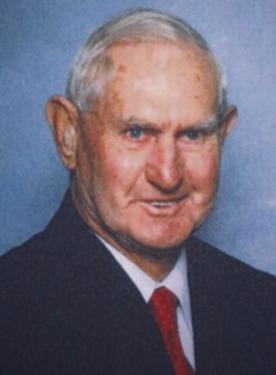 Bill was born May 6, 1922, in Centerville, Kan., the seventh of eight children born to William Wesley and Effie May (Jinks) Ross. He grew up on a farm in Centerville, and attended grade school in Blue Mound schools, graduating from Blue Mound High School with the class of 1940.

On July 3, 1943, he married Dorothy Jean Pruitt in Fort Scott, Kan.; the couple made their home on a farm southwest of Blue Mound. To this union they were blessed with three children: Pauletta, Doyle and Ronnie.

Bill farmed for more than 30 years then he and Jean sold their farm and moved to Moran, Kan., and he worked at the ammunition plant in Parsons; then later moving to Parsons where Bill worked at the Parsons State Training Center. He continued to work for the Parsons State Training Center after moving to Altamont, Kan. After 15 years he retired in 1987.

He and Jean sold their home in Altamont and began a life of travel in their new fifth wheel they called home. Wintering in the Brownsville, Texas, area they traveled across the states for almost ten years. Bill and Jean loved to travel, camp and fish, and they loved their choice of retirement.

In 1997 Bill and Jean settled in Osawatomie. They enjoyed being in Osawatomie and being close to their daughter Pauletta and her family.  Jean later became ill and the couple moved from their home to Carr Apartments. Jean died on Oct. 4, 2005. Bill and Jean were married for 62 years.

Bill remained living at the apartment they had shared. With failing eyesight, television was a struggle to watch, but he enjoyed talking to people and loved to take walks and of course spend time with his family. In 2011 Bill moved to Vintage Park Assisted Living in Osawatomie where he remained until he became ill and spent a week in the hospital. On Oct. 26 he was moved to the Life Care Center of Osawatomie where he passed the following day.

He was a member of the First Baptist Church of Osawatomie for many years.

Bill was preceded in death by his parents; his wife, Jean; six brothers and one sister.

Survivors include his children: Pauletta (Clayton) Stites of Osawatomie, Doyle (Nola) Ross of Amarillo, Texas, and Ronnie (Betty) Ross of Corpus Christi, Texas. Grandchildren: Tammy, Trent, Troy, Tanya, Jennifer, Kendall and Kiley and 16 great-grandchildren along with many other family and friends.